Announcement: And The Baby's Name Is...

Earlier this week I gave a hint as to what we are naming our son. It was surprisingly hard to pick a name for this little guy. Surprising because I have had baby names picked out since I was in my early teens and when we were dating, my husband and I would sometimes talk about baby names while we dreamed up what our life would be like in the future.

Fast forward a few years and we found ourselves in a tough spot. We finally were expecting our very own bundle of joy and now new we were having a boy and all of those ideas for names... They were gone. We had new reasons as to why we didn't want to use them and decided to throw ourselves even harder into our book of baby names.

About a week after we found out we were having a boy I was looking through an app on my phone with tons of names and came across one that just sounded right to me. It was trendy but not too trendy and classy, in my opinion at least. I said the name to my husband with maybe a hint of conviction and he repeated the name slowly, paused and followed it with "nah, I'm not sure about that name".

I was a tad disappointed since I thought he would love it too but I also wasn't devastated. Over the next few minutes he said the name aloud a few times as if he was trying to convince himself of the name. My response was, "If you don't love it then don't try to love it. We need a name that we both love." To which he answered, "Actually, I do love it. I really do. I promise."

So that was that. Over the next week we would say the name in sentences, pretend we were talking to our son saying things like, (name) go to your room, (name) eat your food, (name) I love you. We needed to make sure it was something we would stick with and something that sounded right to us.Well it did and three and a half months later we still love it. 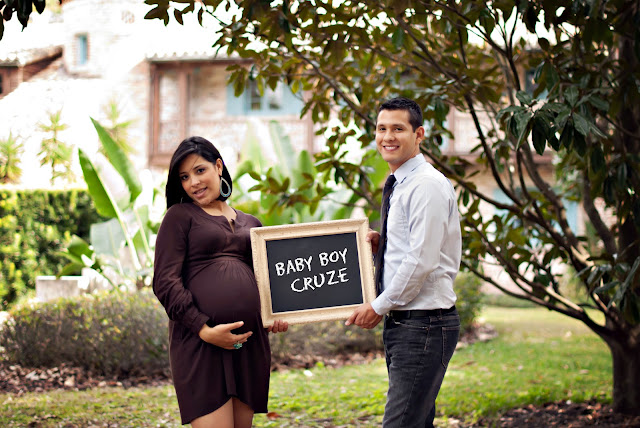 We have shared his name with people who ask and of course the opinions are mixed. We realize it's different so not everyone will like it but hopefully Cruze will grow up with a name he's proud of.
We are still working on a middle name. Ideas?
at 3:33 PM